The last 3 voices of our series are the “Voices of Outlook”… these voices are not indentified by how their audience views them, but rather how they view the world.

Here’s the 3 voices we’re talking about. 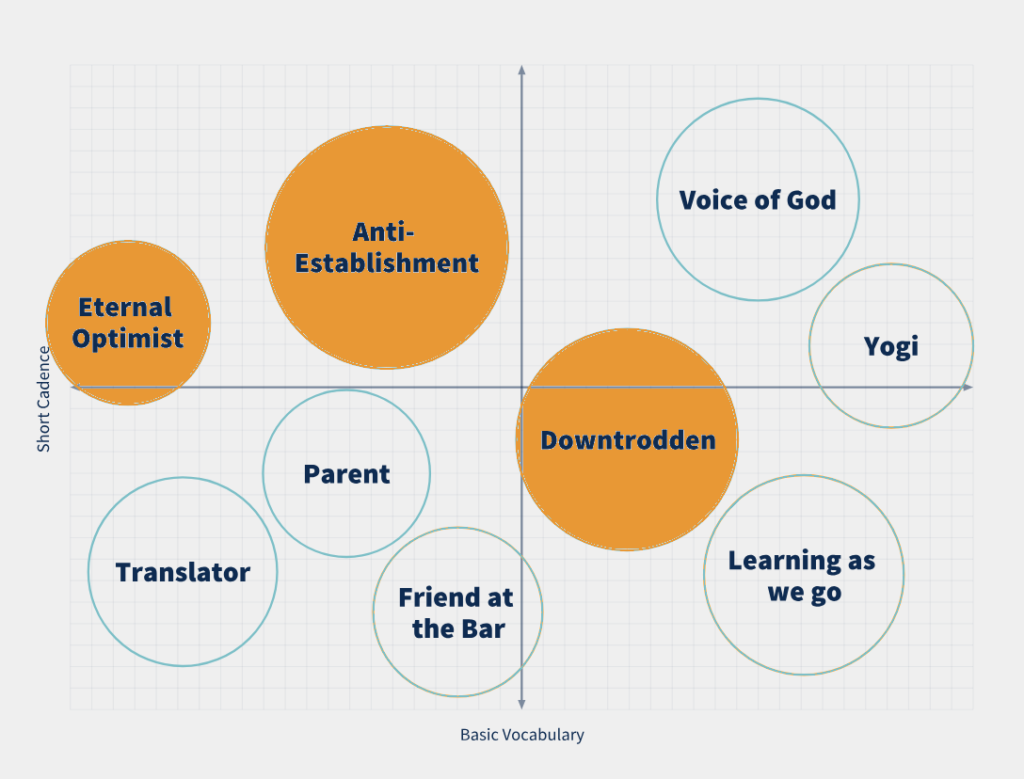 In stark contrast to the authoritative voice, the downtrodden seems to be often telling you, “I don’t know anything about anything so let’s work this out together.” One of my favorites at this is Chuck Wendig. His posts have an underlying tone of tragedy to them that make them compelling and funny to read while giving great advice. Another is James Altucher, who has made his writing career about detailing the giant mistakes he’s made in his life while readily admitting he hasn’t quite got it right yet.

Louis CK is one very famous example of someone who uses a downtrodden voice. At 8:29 of this video fellow comedians talk about the vast difference in voice between Louis CK and Jerry Seinfeld (the part about voice is only about 2 minutes long from 8:29-10:30, but if you get the chance, watch the whole video. Great stuff on the creative process).

Applebee’s has a wide range of voices in their commercials. In the early 2000’s, Applebee’s settled on a sad tone, as seen here by the 2002 ad, “Coach.” My favorite from this era was an ad where a high school football team lost the “big game,” and the coach decided to take them to Applebee’s. The restaurant was closed and the team was downtrodden. But, the management turned the lights back on and welcomed the team in. All part of the “neighborhood.” <— If anyone can find a link to that ad, I’d love to add it here.

If there’s a downtrodden, there’s an optimist. The optimist gives you a boost of sunshine every time you read it. One of my favorites is Marie Forleo, who famously preaches “Everything is Figure-outable.” Even when she’s talking about big, heavy topics like death there’s an underlying message that “it’s all going to be ok.” Often the tone is happy and fun, the cadence can be either in short, energetic bursts or longer, and the vocabulary varies wildly. The key to the optimist is the happy tone.

This is just how it sounds. No more status quo. Current advice is wrong. The tone is irreverent, and often snarky. Cadence is short. Vocabulary varies. These blogs are fun to read because they speak to the collective frustrations of the masses. They sympathize with people who have followed the current advice and failed.

One of the few blogs I read every time they hit my inbox is Ash Ambirge’s Middle Finger Project. Her about page exhibits her voice better than I could describe it:

Because we’re in the business of shunning cliché, overused language, business practices and lifestyle choices, in favor of originality, happiness & doing what feels good for you. Also, ‘no rules, just right’ was taken by Outback Steakhouse.